The Sinking City review: the horrors of touchy controls and racist writers

The Sinking City opens with a nightmare. There’s a drowned town, and a gargantuan, otherworldly jellyfish-like creature floating through the sky. There is a shot of a tooth-lined maw at the bottom of the ocean. It’s this dream that sets the events of the game in motion.

The game’s opening isn’t subtle about its mood, nor does it try to hide the inspiration taken from H.P. Lovecraft. Storylines from “Facts Concerning the Late Arthur Jermyn and His Family” and The Shadow Over Innsmouth appear as major plot points in the first few hours of the game. But don’t worry if this doesn’t mean anything to you; a love (or hate) for Lovecraft — or even a passing interest — isn’t required to enjoy the game, though it may help.

The Sinking City even acknowledges the problems inherent in Lovecraft’s writings right from the beginning. It opens with the following warning:

Inspired by the works of H.P. Lovecraft, The Sinking City depicts an era in which ethnic, racial, and other minorities were frequently mistreated by society. These prejudices were and still are wrong, but have been included for an authentic depiction of that time, rather than pretend they never existed.

While The Sinking City subverts some of Lovecraft’s racist tropes, like the “horrors” of interracial marriage, it rarely confronts them directly. The various characters you meet speak about their fear of what’s happening with the creatures that seem to be slowly creeping into the city and living there, and it can be read as slight criticism of Lovecraft’s fear of immigrants and miscegenation. The Klan itself also plays a part in the narrative, and it’s presented matter-of-factly. This is a thing that would have happened in this time period, the game suggests, and commentary isn’t necessary.

The city at the heart of the story, Oakmont, Massachusetts, has fallen victim to an unnatural disaster known as The Flood. Rising water separated the city from the mainland six months ago. Barnacles and seaweed cover the sides of buildings. Entire roads are underwater, forcing the people who remain to use boats for transportation. Makeshift docks and bridges have been built to help the residents move around. Everyone is coping with the strange situation as best they can.

Oakmont isn’t as much a character in the story as it is a looming presence lurking in the background, constantly reminding me that something is not right even as life in the city continues under these odd circumstances. There are scary things lurking beneath the facade of normalcy everyone tries to project in this situation. And I mean that literally, since this is a Lovecraftian story, and figuratively, since the people find themselves increasingly removed from civilization.

I play as Charles Reed, a WWI veteran turned private investigator. I’ve come to the city of Oakmont looking for answers about the nightmares that haunt me. I’m also here to offer my services investigating crimes. I’m hired to look into a murder as soon as I arrive in town. Before I’m even off the docks, in fact.

That initial case introduces the structure of the game, as I continue to take cases even after I solve that first mystery. Some of them relate directly to The Flood and my nightmares, but others just flesh out the story of Oakmont and the people struggling to survive there. I investigate robberies, cults, civic corruption, and hate crimes as I also try to work out why I’m having these visions of dark places filled with terrifying abominations. The stakes get higher and higher as the story progresses. My investigation grows from solving that single original murder to deciding the fate of the entire world.

The Sinking City leans heavily into the private investigator aspect of Reed’s story. I explore the city, moving from location to location to search for clues — things like bloodstains or newspaper clippings — that have a helpful icon superimposed on them. My interactions with the city’s inhabitants are equal parts conversation and interrogation as I speak with witnesses and anyone who might have helpful information about each case. I log the clues in my notebook, which has a page that lets me connect those leads to draw conclusions about what I believe happened in each case. I also have a magical power that lets me piece together echoes of past events to relive crimes, or find secret doorways hiding more clues. 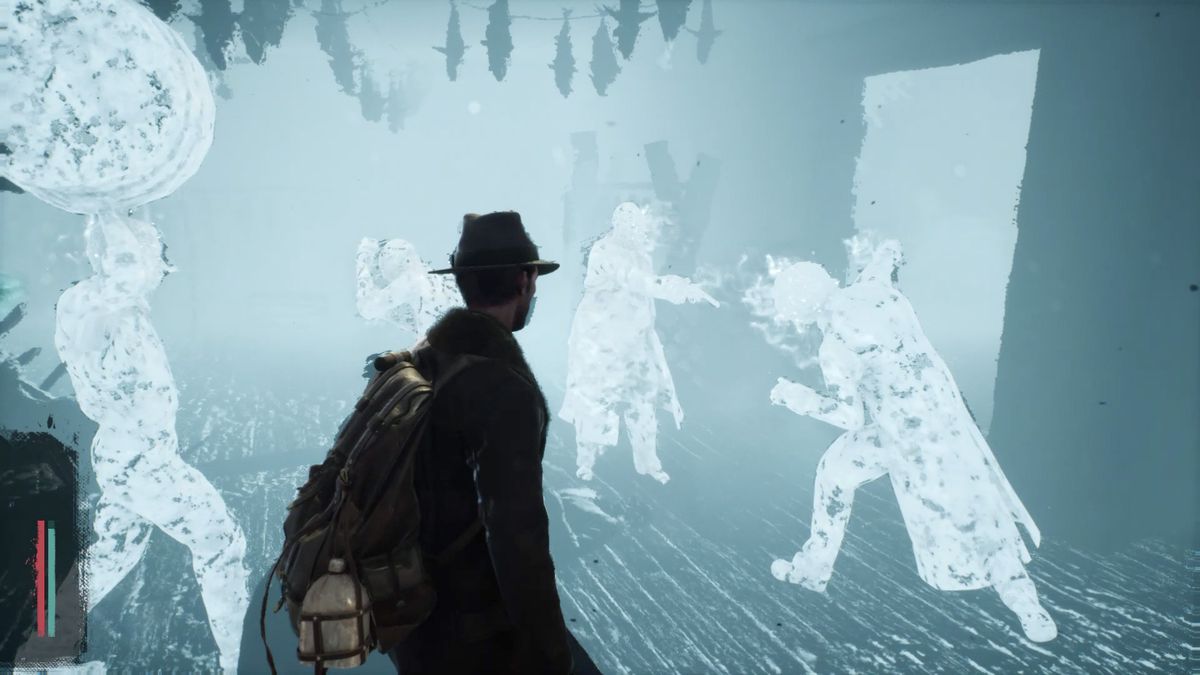 Collecting all these clues takes work. A conversation leads me to an address, or rather, cross streets, that I have to find on the map myself. I find the name of a ship inside the abandoned building at that location. I take that name to the local newspaper, and search the archives for recent advertisements to find out who owns it. That leads me back to the docks and another crime scene. Once I gather the clues there — picking up weapons, noting how the bodies fell — I have enough information to recreate the events in my Mind’s Eye. I watch the scene replay, I draw my conclusions about what happened, and then I follow the trail of blood to find the captain. Mystery solved.

It’s a far more realistic approach to investigation than I’ve seen in any game like this, even with the supernatural elements. I have to use newspaper articles, public records, and police blotters to gather information. I’m not solving puzzles, really — the next step is always logical and easy enough to find — but the effort involved makes the progress feel earned. It’s plodding, methodical detective work.

It can also feel perfunctory. I arrive somewhere, find the required number of clues, piece together new information, then head elsewhere to do it all over again. While it’s repetitive and predictable, it also feels procedural. It’s my job, after all.

The biggest problem is that the controls feel clunky and unsatisfying. Reed shambles more than he walks, which is a problem when I have to spend so much time traveling from archive to archive and clue to clue. There’s no flow to the way Reed navigates the city; I ricochet off of pedestrians and get stuck against insurmountable curbs.

These issues make the movement itself feel outdated, as if it had been lifted from a PlayStation 2 game. Traveling from one crime scene to the next takes too much time, even when I’m sprinting. There are precious few fast-travel points, and I have to walk to them before they become available. Moving from my hotel room to the police station requires running down the road for a block, climbing into a boat for a couple more blocks, running again to another location, taking another boat, then more running until I get to my destination. It feels unnecessary; all this travel adds nothing to the game except mounting frustration with the controls. 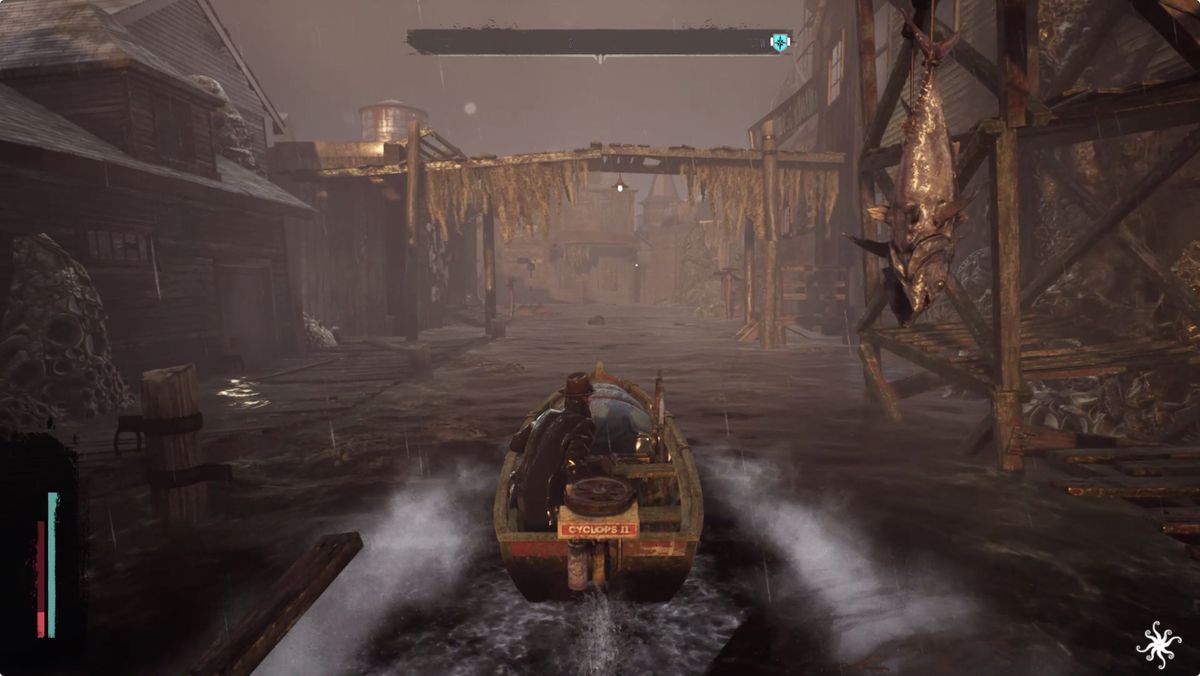 Combat — whether against horrific Wylebeasts who can sense death, or local goons — amplifies that frustration. The game’s helpful tips remind me that fighting should be avoided and ammo is a precious resource, but there are usually Wylebeasts or (semi?) human guards waiting for me at the next crime scene, where I have no choice but to fight. I never know when my imprecise movements, drawn-out animations, or flailing attacks are going to lead to my next death. There’s no real penalty when I die — I’m transported somewhere safe and vaguely nearby with my inventory intact, and the scene resets. But I have to trudge my way back through the streets and try again. It feels like a punishment more than an impediment.

And that’s the overwhelming feeling I’m left with after playing The Sinking City. So much about the investigations and mystery solving is innovative and satisfying, but the controls and pacing feel anachronistic and off-putting. The design of the city tells part of the story, but getting around that city becomes tiresome. There’s a detailed, evocative world of horrors to experience in this isolated town, but I’m constantly frustrated by how I’m forced to interact with it.

All the best parts of The Sinking City are buried inside such a lackluster wrapper that it becomes difficult to want to find them. The realism of the investigation mechanics gets overshadowed by the drudgery of navigating the city, to the point where I couldn’t be bothered to pick up side cases by the end because I wanted to avoid more walking. I want to know why I keep seeing these ancient, horrific creatures in my sleep, and I want to unravel the mysteries of this town, but I wish it weren’t so mechanically painful to do so. Unfortunately, the biggest horrors of The Sinking City come from the controls, not my own struggles with sanity.

The Sinking City is being released June 27 on PlayStation 4, Windows PC, and Xbox One. The game was reviewed using a final “retail” Windows download code provided by Bigben Interactive. You can find additional information about Polygon’s ethics policy here.