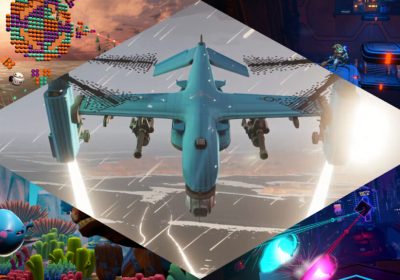 It’s always great to see a varied selection of virtual reality (VR) titles arrive each week and the following seven days is a perfect testament to that. Strategy, rhythm action, puzzling and platformers are all there, with five new videogames showcasing the power of VR.

’80s classic Carrier Command is set to make a return in both VR and non-VR form thanks to Geometa and Microprose. Take command of a high tech aircraft carrier filled to the brim with deployable craft to conduct missions with. From the command deck, you can operate its systems, gathering intelligence before launching an offensive to conquer the Archipelago.

This rhythm action videogame has built up a loyal following since its initial PC VR release in 2019 and now it’s the turn of PlayStation VR. The PlayStation VR version will feature all 55 licensed songs as well as 13 retro-future-inspired worlds to play them in; plus the four DLC music packs will also be available. Synth Riders features a selection of gameplay modes and modifiers including “Force” which adds a boxing mechanic and “Spin” for some 360-degree tunes.

A family-friendly wave shooter with tower defence elements, Blobkin Blaster takes you under the sea to fight polluted, mutated monsters lurking in the deep. By your side are the cute Blobkin, little critters who’ll help you clean up the oceans.

After an Oculus Rift launch in late 2020 followed by Steam earlier this year, it’s soon time for Monologic Games’ platformer Ven VR Adventure to arrive on Oculus Quest. Comprising a total of 12 levels split across three regions, the world of Ven is a mixture of magic and mechanics where you control titular hero Ven through diabolical locations designed to kill him at every turn.

Time for some chilled out puzzle-solving in a similar vein to Puzzle Bobble, all you need to do is pop all the coloured marbles using a hand crossbow. Get stuck on a tricky bit, no problem, use one of the special but limited abilities to clear a load of the marbles out. Best of all, it’s going to be free.