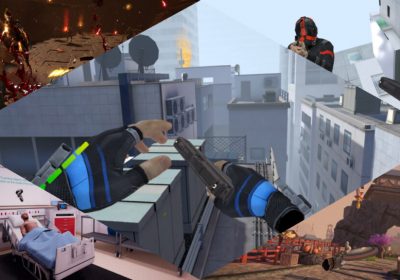 It’s currently raining which makes for a perfect excuse to not go outside and enjoy some virtual reality (VR) gaming instead. July has been an awesome month for new videogames, and as we welcome in August here’s a selection of titles that have caught VRFocus’ eye on the release schedule.

A hardcore action RPG designed for veteran VR players, Everslaught drops you in a fantasy world where you traverse an ancient city filled with randomly generating dungeons, monsters galore and an upgradable skill and weapon set to play with. It’s designed to be very fast and unrelenting, where you can mix up the combat between melee and ranged weaponry using a rather cool arm gadget.

A hospital simulator designed for training: “Valley General simulations are accurately representative of hospital environments. We present the truest to life training scenario from the audio environment to equipment interaction and lighting to accessories. Interactions are closely modelled on the real life-saving equipment for the most accurate and available learning.”

Released as a Steam Early Access title in 2020, now it’s the turn of Oculus Quest players to try their hand at disc golf, in a cool Japanese Samurai setting. Offering solo or online gameplay for up to three other players, Disc Ninja has 15 courses to complete, each with its own secrets including shortcuts and hidden loot which unlocks cosmetic items.

Another Steam Early Access videogame due to make its debut on Oculus Quest, Stride is a parkour experience all about running across rooftops, wall running and shooting bad guys. It consists of three modes Endless Mode, Time Run and Arena. Endless provides procedurally generated levels to get as far as possible, Time Run is all about being really quick and flying through the levels as smoothly as possible to score big points; whilst Arena Mode gives you the greatest freedom with challenges to complete over a wide-open area.