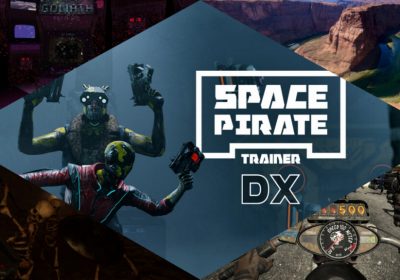 Welcome to another Friday VR Drop, your regular round-up of the virtual reality (VR) videogames due for release in the coming week. Oculus Quest owners are in for a treat, whether they like powerful narratives, a bit of travel, or have the space for some epic multiplayer battles. Plus, PC VR users get a look in but nothing for PlayStation VR unfortunately.

Ok, so normally on the VR Drop we don’t feature updates to videogames but this one is a little different, in fact, it’s a lot different. Space Pirate Trainer was one of the quintessential wave shooters back in 2016 that everyone had to play and it’s still fun now. I-Illusions’ update to Space Pirate Trainer DX takes the title in a bold new direction turning it into a laser tag multiplayer where two players either locally or online can run around a virtual arena. The only caveat, you need an area that’s at least 10m x 10m (32ft x 32ft).

An animated short that’s currently part of Venice VR Expanded, Goliath: Playing With Reality is: “a true story of so-called ‘schizophrenia’ and the power of gaming communities.” Narrated by Academy Award-winning actor  Tilda Swinton, the piece: “guides you through the many realities of Goliath, a man who spent years isolated in psychiatric institutions but finds connection in multiplayer games.”

A travel experience where you can explore 12 beautiful locations including Mount Whitney, Alabama Hills, The Wave, Arches National Park and Death Valley National Park. A virtual guide is on hand to provide useful information on these places of natural wonder.

Coming to Steam Early Access is Legendary Tales, an action role-playing game (RPG) that supports both single and multiplayer co-op – up to 4 players. Step into a dungeon with friends to fight hordes of monsters, collecting useful items along the way to upgrade your abilities. The developer aims to fully launch the videogame in early 2022.

As one game enters early access another steps out the door, this time it’s Hell Road VR. Crossing zombies with Road Rash, Hell Road VR is all about racing through a post-apocalyptic world killing as many of these brain hungry monsters as possible. Utilise weapons including an SMG, spear, crossbow, grenade launcher and more, then upgrade your ride to deal out more carnage.