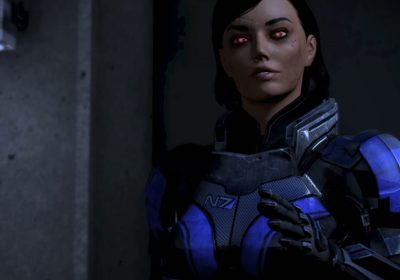 I’ve lost count of how many times I’ve played through the Mass Effect trilogy. It’s my absolute favorite series, and I’ve developed a bit of a yearly ritual where I replay the trilogy over the summer. I usually make the same few choices, drop Ashley, save Wrex, romance Garrus or Thane, opt for Synthesis – but I am never Renegade. I’ve run through the trilogy I don’t know how many times and outside of a couple of choices, I’m Paragon all the way. In my most recent playthrough, I started to give life as a jerk another shot, but too many of Mass Effect’s Renegade options just don’t make sense for Commander Shepard.

In a Renegade run, Shepard is almost comically nasty. In case there was ever any doubt in Shepard’s alignment, Bioware beats you over the head with a bunch of horribly exaggerated facial features. In my whopping one Renegade playthrough, Shepard’s face began to crack and glow, a constant reminder of her violent leanings with the subtlety and grace of a cartoon villain. Everyone around you is alarmingly calm about the fact that Shepard’s face is cracking apart, Dr. Chakwas simply offers to fix her scars, and in a series where giant space cuttlefish are rolling up to commit their terrifying ritualistic genocide – I still have a little trouble with believing something like this. Please, Garrus, don’t flirt with me while my face is literally breaking apart.

But weird glow-face aside, that’s not even my biggest beef with Mass Effect’s Renegade options. I described my Shepard as evil when discussing it with another fan recently and was met with some pushback, but I can’t think of much else more fitting. I look at things like the Overlord DLC, which gives you the gross option of leaving David with his abusive brother, Archer, who’s torturing him in a hellish experiment. The Paragon option let me rescue David from that monster – and I don’t even think that went far enough. The Paragon option should’ve been to shoot Archer, but the Renegade choice leaves David with his abuser under the guise of “for the greater good.” Even outside of your own personal choices between Renegade and Paragon options, the way others characterize Shepard leads me to believe this is just unbelievably cruel – needlessly so – for the sake of some evil brownie points.

In Zaeed’s loyalty mission, Mass Effect asks Shepard to choose between letting a factory of workers burn to death or chasing down Zaeed’s enemy – Vido Santiago. I know Vido did some truly heinous shit, I know Zaeed goes off the rails incensed by his revenge – but the choice is absurd. Our hero of the Reaper war, Commander Shepard, is supposed to abandon a factory full of desperate people in favor of helping Zaeed so this man doesn’t have a hissy fit and get tilted and die at the end of Mass Effect 2. I don’t believe it – it’s too jarring of a juxtaposition.

You can also kill Mordin yourself and prevent him from distributing the cure for the Genophage to the Krogan, really doubling down on the idea that Renegade Shepard isn’t just some vigilante concerned about saving folks, they’re just a downright awful human being. You can kill Legion, too, and even Wrex. It’s all just a series of what in the absolute hell decisions while the people around my Shepard continued to contextualize her as a savior. None of it makes sense.

But I get it to some extent – you’re trying to gamify morality, and it’s not the easiest of tasks. But as Bioware moves forward, I think the studio and others like it are slowly clicking with the idea that we don’t need strict systems when it comes to right and wrong. And you certainly don’t need to paint your protagonist in bizarre, out-of-character shades of evil to progress those systems. Of course, there are a few Renegade choices I prefer on occasion, but nothing ever compelling enough to justify smacking the red choice every time. So, as we near the launch ofMass Effect’s Legendary Edition, I’ll be filling up my little blue bar with all of the Paragon points it can handle. I’m Commander Goody Two Shoes, and when it comes to Mass Effect’s morality system, I’m fine with that.