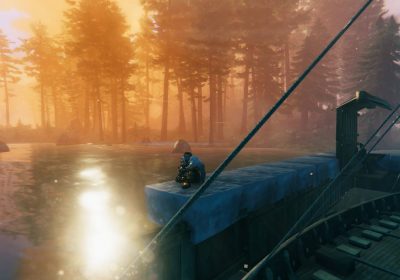 I’m utterly charmed by the early access survival game Valheim, and with over 4 million copies sold since launch, I’m not alone. I’m also an avid survival game fan, and play pretty much every example of the genre that I can find.

But something about Valheim is different. More refined and elegant. It all comes down to one thing: Design negative space.

The concept came up while I was sitting with our design team at Blackbird Interactive during our weekly Design Sync, in which we discuss recent games, design principles and phenomena. The team is made up of brilliant designers of all career stages: Elliot Hudson, our creative director; Jeremy Hardy, who leads our ship team; Ian Longiaru and Ryan LeMesurier, who are part of the ship design team; Jason Barth, who works on our economy and progression systems; and Vidhi Shah, who is our designer behind a lot of the in-bay systems and user experience work.

Negative space is the principle that, in any artistic medium, what you leave out is just as important as what you include. The human brain is predisposed to take what’s missing into account as much as what’s included, whether that means seeing additional shapes in a painting or allowing your art to take up the space needed to show it off to its maximum potential.

Negative space in game design generally refers to three things: the pacing of how content is exposed to players, how systems interact with one another, and the complexity of those systems. This is how Valheim uses negative space to such great effect, and the most important requirement to making this approach work well.

You have exactly as much time as you need

Much of Valheim’s ingenuity lies in its clever progression system, which exhibits an underlying trust in the player. If you’ve ever played a game that felt like it was constantly anxious about you running out of things to do and was throwing system after system and quest after quest at you … well, Valheim is the antithesis of this.

You start out with a simple mission: Build a small shelter and get to know the first two biomes. The meadows are deliberately serene and safe. You may run into a greydwarf here and there, but overall, this is the anchor of most of the world’s progression, and the place I always return to while venturing out farther and farther. The meadows intentionally offer plenty of resources, signaling safety and a lot of space to play around with the building system.

By the time you’re able to do this, you’ll likely already know how.
Image: Iron Gate Studio/Coffee Stain Publishing via Jennifer Scheurle

The Valheim team is careful in how the game exposes progress and resources to you, making you work hard and claw through a number of challenges to reach the next batch of resources to manage.

Each resource gathered is on an escalating risk curve that melds well with your personal skill and equipment progression, meaning that focus is prioritized and the game never becomes too grindy or overwhelming with resource management.

For example, Valheim starts you out with gathering wood, stone, and flint. Those resources are related to progression for building tools and weapons, which are perfectly suited for your first two biomes: the meadows and the black forest. Other resources that require more advanced in-game equipment to process are not something you can reach, and they may even be out of sight or gated by an escalation of risk.

Going into the plains or the swamps would be a death sentence at this stage, so there is little temptation to try and charge ahead before you are ready. Each area prepares you for the next, at your own pace, while protecting you from the overwhelming amount of possibilities in mixing different tools, biomes, and enemies all at once. It’s up to you to learn and grow, and decide when to move onto the next challenge.

Even Valheim’s building system does this! Only having access to wood buildings at first and lacking stone and iron beams, for example, helps you understand and work with the building system at a basic level before moving onto more complex ideas. There is enough room to experiment and get lost meaningfully in each stage of the progression, and to spend as much time there as you’d like.

Each progression section is capped off by a fairly challenging boss fight, which gates the progression into new tools, biomes, and equipment until you’re ready for them. It’s a brilliant system for deliberately creating negative space, giving players the time and freedom to experiment with the current tools until they are truly ready to take on more systems. There’s never any rush. Once you’ve proven you understand the basics of the building system and how to survive, you unlock the ability to mine by besting the first boss, allowing you to further explore the possibilities of new resources.

Provide the simplicity, let the player bring the complexity

Designing negative space requires that developers give players room for experimentation and imagination without cluttering the canvas with too much content, and that they get over their inner anxiety about whether players have enough to do.

The Valheim developers seem to trust themselves as much as they trust the players. Valheim does not need complex skill trees; instead, players learn by doing. You progress by using tools and weapons, and repeating tasks. This pushes players into trying all kinds of different loadouts — game designers sometimes refer to the way players experiment as “expressions” — during gameplay. Therefore, no tool or action is wasted; all time invested into experimenting and trying new things is valid, and often yields positive outcomes for progression.

Do you want to be an explorer, or a homebody? The choice is up to you.
Image: Iron Gate Studio/Coffee Stain Publishing via Jennifer Scheurle

As part of its combat system, Valheim leans into a similar simplicity and elegance as games such as Dark Souls and even Breath of the Wild: A handful of weapon types, a stamina system, and a parry/block system are enough to make it shine. No skills, no magic spells — just you and your enemies. All of it is thematically sound, lodging right into the no-clutter philosophy with enough complexity to reward players who explore the boundaries and use cases of each weapon to find where their personal preferences lie.

Even as an avid survival game player with an affinity for building, I was surprised by how much freedom and playfulness I would get out of Valheim’s seemingly simple and limited building system. The structural pieces available are far fewer than expected. But in combination with free-form placement and the ability to snap pieces together, all while taking stability into account, so many expressions become exciting for the player.

11 tips for living your best afterlife in Valheim

From those who just wish to build a simple hut, to those who want to build grand, authentic longhouses, right up to those who seek to make brilliant sculptures: Valheim always leaves enough room for players to express themselves even within its simple rules and options.

This is also an expression of design negative space: a limited canvas, limited pieces, but it can all be used however you can safely get away with it. The possibilities for experimentation and imagination feel like they’re in near-perfect balance with the amount of options given to the player: Never too much, always more capable than they may appear at first.

It all really comes down to one directive, used gracefully: Trust your player.

Valheim does this masterfully. It doesn’t require you to get lost in complex metagame labyrinths, and no skill trees get in the way. The design seems to be saying one thing: Just go out and play. There is always enough to do, always more to explore; you can take as much or as little time as needed in each phase. There are always enough pieces to play with in this sort of an interconnected system of seemingly simple features that keep you on your toes.

Games that give as much freedom for experimentation and discovery to the player as Valheim do have player trust as their most important ingredient. Elegance in design and especially design negative space requires that designers trust that players will find enjoyment in filling said negative space with joy, with comedy, with creativity, or anything else they want. But they have to trust that the players will do something of worth with it.

It’s a scary thing to do as a developer: Our audience always has other games to play, more backlogs to work through. Sometimes, we feel required to create dense content to keep a player’s attention. Sometimes, the need for a smaller scope can take that decision from us, and sometimes we make the decision ourselves to trust our players with room to experiment. But in any case, doing so requires a confidence that isn’t easy to come by.

At first glance, Valheim may not seem like a game that would inspire such qualities. But its huge success and word-of-mouth spread isl, in my opinion, all due to this particular formula.

Trust your player to fill your game spaces with art, such as wonderfully built sculptures and towns, and with comedy, such as all the videos of players hilariously getting struck by a domino effect of falling trees — that is what gives games reliant on community the most heart.

All developers need to do is provide the canvas … and enough space for players to breathe.