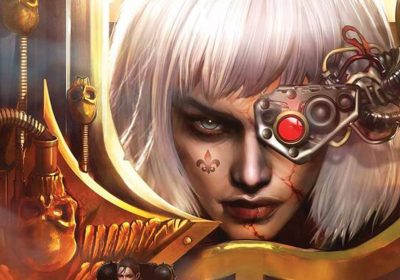 I’m not sure if you were aware, but in the grim darkness of Warhammer 40,000’s far future there is only war. Despite the billions of mortal soldiers prosecuting that war, the camera more often than not lingers on the Space Marines. Over the years they’ve become the poster boys for an assortment of millennia-long attempted counter-genocides. But there are also nuns — very, very violent nuns — and this week those fightin’ nuns get their own comic book.

It’s called Warhammer 40,000: Sisters of Battle, and it’s really not at all what I expected.

Who is making Warhammer 40,000 Sisters of Battle?

Torunn Grønbekk, best known for her work on The Mighty Valkyries, is handling the writing. Artist Edgar Salazar (League of Legends: Zed, Rise of the Black Panther, Venom) is on the art, while Arif Prianto takes care of the color. Games Workshop has a hand on the ball, of course, as does Kieron Gillen, whose “thank you” gets the same sized font as the other folks listed here inside the coverleaf. He recently knocked the Warhammer 40,000: Marneus Calgar, the first Marvel/Games Workshop joint project, right out of the park.

What is Warhammer 40,000 Sisters of Battle about?

This is a book about heresy on the planet Siscia, which has been overtaken by the agents of Chaos. That means blood, and gore, and death, and little old ladies that spontaneously morph into giant purple tentacle things and eat people’s heads off. Pretty standard stuff for the 41st millennia.

Recently arrived on the scene is Canoness Veridyan — a beloved character from the ancient Warhammer lore circa 1997 — and a squad of troops from the Order of our Martyred Lady. They dress in black armor with red accents and, like all Sisters of Battle, have a preference for flamethrowers. They tend to get the job done, and the art in this issue really … sizzles.

Is there any required reading?

Absolutely not. The comic is designed to be an introduction into the world of 40K, and by and large it does a very fine job.

Is it a good book?

It’s very safe, very rote, almost liturgical in its own bizarre way. There’s not really a main character yet either, but that will hopefully change in issue #2 now that the cast has been winnowed down a bit by the aforementioned purple beastie.

It’s just that it’s a little bit disappointing to read a story that, so far at least, feels very safe.

Games Workshop has been going through a very slow and very public transformation lately. Traditionally its franchises have been the exclusive playground of well-heeled white men, and GW’s pricey products as well as their art assets have all echoed that messaging. Nowhere is that more clear than in the canonical representation of the Sisters of Battle — sexy, gritty women with sleek armor and enormous military assets.

But things have been changing, like I said. The Astra Militarum, also known as the Imperial Guard, has gotten more and more diverse over the years. A recent short story in White Dwarf magazine took great care to talk about all the women in uniform fighting and dying on the front lines. Meanwhile, the mighty Space Marines have been getting more colorful, with Black and brown faces appearing among the ranks of even the iconic blue-armored Ultramarines. Messaging on social media has likewise been progressive and welcoming. “Warhammer is for everyone” the company said last year during the thick of the Black Lives Matter protests, and it felt good to hear that said.

I expected more of that to shine through here with Sisters of Battle. But not yet, at least. They’re well trained, pious, very attractive women who are just following orders and kicking ass and dying beautifully in every panel. And that’s fine. Even the somewhat tawdry alternate cover featuring art borrowed from John Blanche’s second edition sourcebook, with the Canonness proudly presenting her glistening, four-inch, ceramite and adamantine heels to the camera … it’s fine. It’s just fine.

But the Sisters of Battle feel more important for the 40K franchise than ever before. Here is a group of highly capable women fighting and dying on the front lines, in the very most dangerous warzones in the galaxy. It could be just the thing to bring more women into the hobby, and I imagine that’s why the Sisters have featured so prominently over the last two years. They’ve been featured in an extended novella published over the course of a year in White Dwarf; in one of the last books published for 8th edition; in a new, fabulous line of all-plastic miniatures; and in the CGI trailer that helped to kick off the 9th edition of the tabletop game — a trailer that served to elevate the faction, a trailer that placed them for the first time in recent memory shoulder to shoulder with the mighty Space Marines, locked in battle against the xenos scum of the week.

There may never be any female Space Marines ever again, but the Sisters are the next best thing. GW knows that. I was hoping that this comic would help to elevate them and give them a bit higher profile, a bit more agency. So far they’re just here following orders.

We’ll see if that changes as the series continues to roll out.

One panel that popped

You’ll never see a Space Marine mourning, likely because they are literally manufactured to know no fear. Seeing a Sister shed a tear over her fallen comrades stuck with me. It was a good death and a worthy sacrifice, played out in a lavish and cinematic battle, and I appreciated the story lingering there in its aftermath.