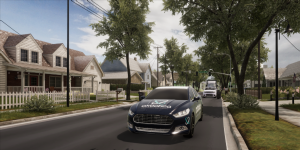 Oxbotica, a U.K.-based developer of autonomous vehicle software, today announced that it raised $47 million in a series B round led by BP Ventures. The startup says the funding will be used to accelerate Oxbotica’s commercial deployment of its software platform across key industries and markets.

Some experts predict the pandemic will hasten adoption of autonomous vehicles for delivery. Self-driving cars, vans, and trucks promise to minimize the risk of spreading disease by limiting driver contact, which is perhaps why people across the globe trust the safety of autonomous vehicles more than they did three years ago, according to several surveys by Deloitte. The demand is particularly acute in short-haul freight, which is experiencing a spike in volume during the outbreak. The producer price index for local truckload carriage jumped 20.4% from July to August, according to the U.S. Bureau of Labor Statistics, most likely propelled by demand for short-haul distribution from warehouses and distribution centers to ecommerce fulfillment centers and stores.

Oxbotica was founded in 2014 by Oxford University professors Paul Newman and Ingmar Posner, who sought to create software that drives autonomous vehicles without depending on expensive third-party infrastructure, third-party maps, or GPS. Newman and Posner led a self-driving car project called RobotCar U.K. as a part of Oxford University’s Department of Engineering Science Mobile Robotics Group. In 2014, the pair used the newly developed technology to found Oxbotica.

Above: Oxbotica can simulate a number of different environments using its platform.

Oxbotica’s platform provides a set of installation and operating tools including mapping, simulation, logging, indexing, vehicle-to-vehicle communication, and diagnostics, with software that’s modular, has low compute power requirements, and integrates with a cloud management. The platform leverages LIDAR sensors and radar for localization and perception for safety purposes and can fuse data from vehicles to increase the intelligence of a fleet.

Oxbotica provides airport, industrial, shuttle, port, automotive, mining, industrial, and logistics solutions for fleet management down to the individual vehicle. The company claims its software — which it’s tested on private roads, test tracks, and simulation for “hundreds of thousands” of miles — is suitable for most vehicle types and rainy, snowy, night, and day conditions, enabling autonomous operation below ground, in deserts and forests, and in fields with or without tracks or lane markings across Europe, Australia, and the U.S.

“Oxbotica has developed and deployed [GAN-based] simulation technology that’s capable of generating thousands of photorealistic images in minute,” the company writes on its website. “The technology can reverse road signage or ‘class switch,’ where one object (e.g. a tree) is replaced with another (e.g. a building). It can also change the lighting of an image to show a particular frame at a different time of the day or season of the year, all while ensuring shadows or reflections appear as they should. It uses these synthetic images to teach its software, producing experiences and rehearsals which are not real but generated, down to the rain drops on camera lenses.”

Several of Oxbotica’s competitors leverage GANs for similar purposes, it’s worth noting. Uber’s Advanced Technologies Unit, which was recently acquired by Aurora, taps GANs to make car trajectory predictions within high-definition maps of roads. For its part, Waymo uses GANs that draw on feeds from real-world sensors to create information about the 3D geometry, semantics, and appearance of objects within a scene.

The Rand Corporation estimates that autonomous cars will have to rack up 11 billion miles before we’ll have reliable statistics on their safety. Cognizant of this and in the interest of redundancy, Oxbotica says it retains the ability to manually take control of vehicles running its software to perform emergency stops and capture data on external loggers. Beyond this, the company claims it gives the safety drivers who monitor its test vehicles both classroom training as well as advanced external training courses. In addition, Oxbotica says it tests its software for bugs and against recorded data and to complete regular penetration tests by emulating the behavior of potential hackers.

In 2017, Oxbotica partnered with supermarket chain Ocado to run an autonomous delivery service in London. Subsequently, the company piloted driverless shuttles at the Gatwick and Heathrow airports and completed 3D street mapping in Canary Wharf and Hounslow, after which it partnered with Navtech to jointly architect an integrated radar-based navigation and perception system.

Oxbotica more recently announced — then cancelled — a collaboration with Addison Lee to develop and launch autonomous taxis in the city of London by 2021. As part of the U.K. Centre for Connected and Autonomous Vehicles-funded (CCAV) Driven project, Oxbotica is simultaneously conducting testing with a fleet of Ford Fusion and Mondeo vehicles running in London and Oxford on public roads. In 2019, the company deployed Mondeos running its software on public roads in Stratford, London to test their use in city environments as a part of Innovate U.K. and the CCAV’s Project Endeavor, ahead of public road trials in Friedrichshafen, Germany following the granting of an automated vehicle (AV) permit recommendation by TÜV SÜD.