During a keynote at the 2020 Consumer Electronics Show earlier this month, Samsung unveiled Ballie, a small, autonomous rolling sphere with a built-in camera, microphone, and speaker. Details were tough to come by (and still are), but in an interview with VentureBeat, Sajid Sadi, vice president of research at Samsung and the head and cofounder of the Samsung Think Tank Team, shared the vision behind the robot and his hopes for its future.

Think Tank Team is the roughly 50-person skunkworks department behind tech underpinning products like Samsung Flow, the Galaxy Gear S2, and Samsung Health. The team is responsible for Project Beyond, a 3D omniview camera in a carryable form factor, and Project Green, an in-house farm-in-miniature that taps fogponics materials developed by NASA. Think Tank Team also developed the Spot, which turns any normal TV (and the space in front of it) into a touch- and gesture-sensitive area. And it commercialized Health+, the family of heart rate and stress-sensing algorithms on every recent Samsung smartphone.

Sadi, who graduated from Columbia University with a bachelor’s degree in computer science and from MIT with a master’s degree and PhD, was also the cofounder and chief architect for education tech startup Tikatok, an acquisition target of Barnes and Noble. He was among the Think Tank Team’s founding members roughly seven years ago, and a lead on Project Small, progenitor to the Galaxy Gear. 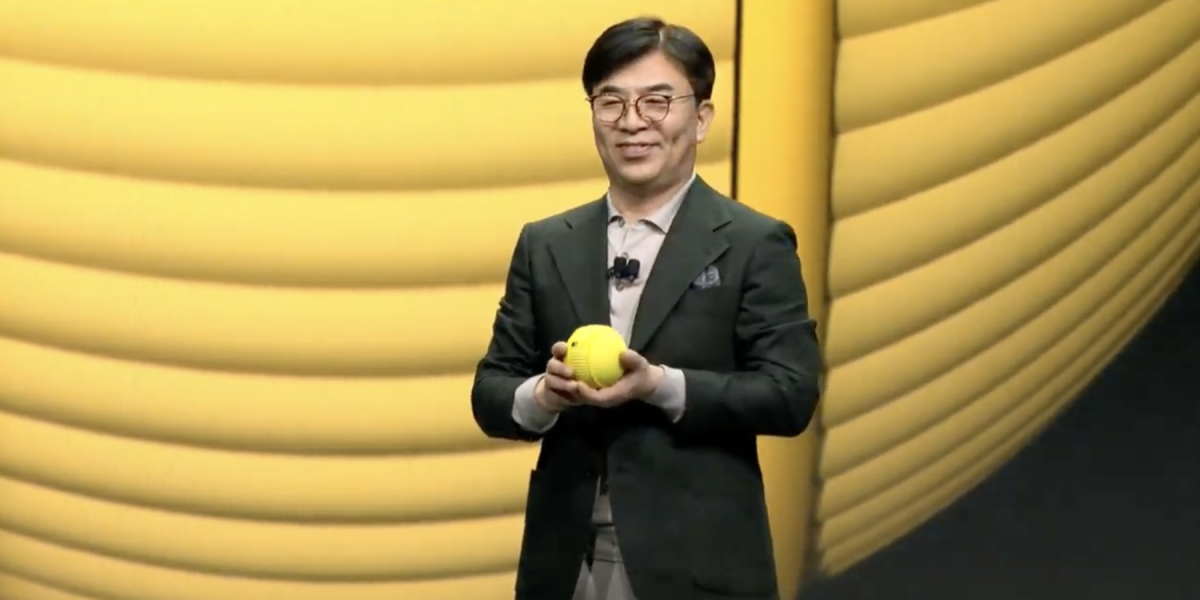 Above: The Ballie concept Samsung demoed during a keynote at the 2020 Consumer Electronics Show.

“We have experts in different areas — everything from physics to machine learning, computer vision, mechanical engineering, electronics, software, industrial designers, visual designers, you name it,” said Sadi. “And what this essentially allows us to do is to solve a problem with the optimal solution.”

With Ballie, two issues off the bat were mobility and personability. The robot needed to be able to traverse a range of different floor types, from hardwood to tile, carpet, and concrete. And it couldn’t look intimidating to those who might encounter it, including children and pets.

Think Tank Team considered a cloth design before settling on the current iteration: a two-wheeled scalloped plastic frame that’s about the size and weight of a grapefruit. The thinking was that the plastic would better stand up to wear and tear, as well as to accidental bumps and scratches inflicted by overzealous users.

“If you think about all the robots that we have in the house today — vacuum cleaners, lawnmowers, and whatever else — they basically operate behind the scenes,” said Sadi. “They’re invisible to you until you see them. Ballie is intrinsically different, because it’s … working with you much more directly. It’s more like a human being in that way, and so there’s a need for it to be safe for you mentally, not just physically — you have to relate to it in a positive way.”

To this end, Ballie communicates where it’s “looking” by physically pointing its camera (which is flanked by a flash and a four-LED status indicator) in the direction of an object (or subject). It rolls and pivots on its axis deliberately to avoid startling anyone nearby. And like a well-trained pooch, it follows behind a person upon command, maintaining a close but comfortable following distance.

Sadi notes that Ballie can be told to “go away” if a person within view doesn’t wish to be observed. It also employs AI that works without an internet connection to minimize any unnecessary transfers of data. “We want the software to be secure across the board … [and to guarantee] that data isn’t just being channeled up to some server for things to happen,” said Sadi.

As is true of most devices, Ballie needs to be intuitive to use. That’s why Sadi and team designed it with out-of-the-box functionality that requires little in the way of configuration. AI enables Ballie to serve as a fitness assistant, as well as an interface to various devices — like smart TVs, motorized curtains, and autonomous vacuum cleaners. It can act as a security robot, patrolling rooms at night and when folks are away during the day. And it taps into smart home device platforms, like Samsung’s SmartThings, for enhanced orchestration.

Ballie can also double as a home monitor for children, pets, and elderly users — particularly those with limited mobility. Sadi notes that Ballie’s ability to move around enables it to respond to a person wherever they are. Parents could ask Ballie to check up on kids to make sure they’ve completed their homework, for instance, or monitor the types of television shows and movies they’re watching. As it’s doing all that, it might also watch for health-related emergencies, like falls. 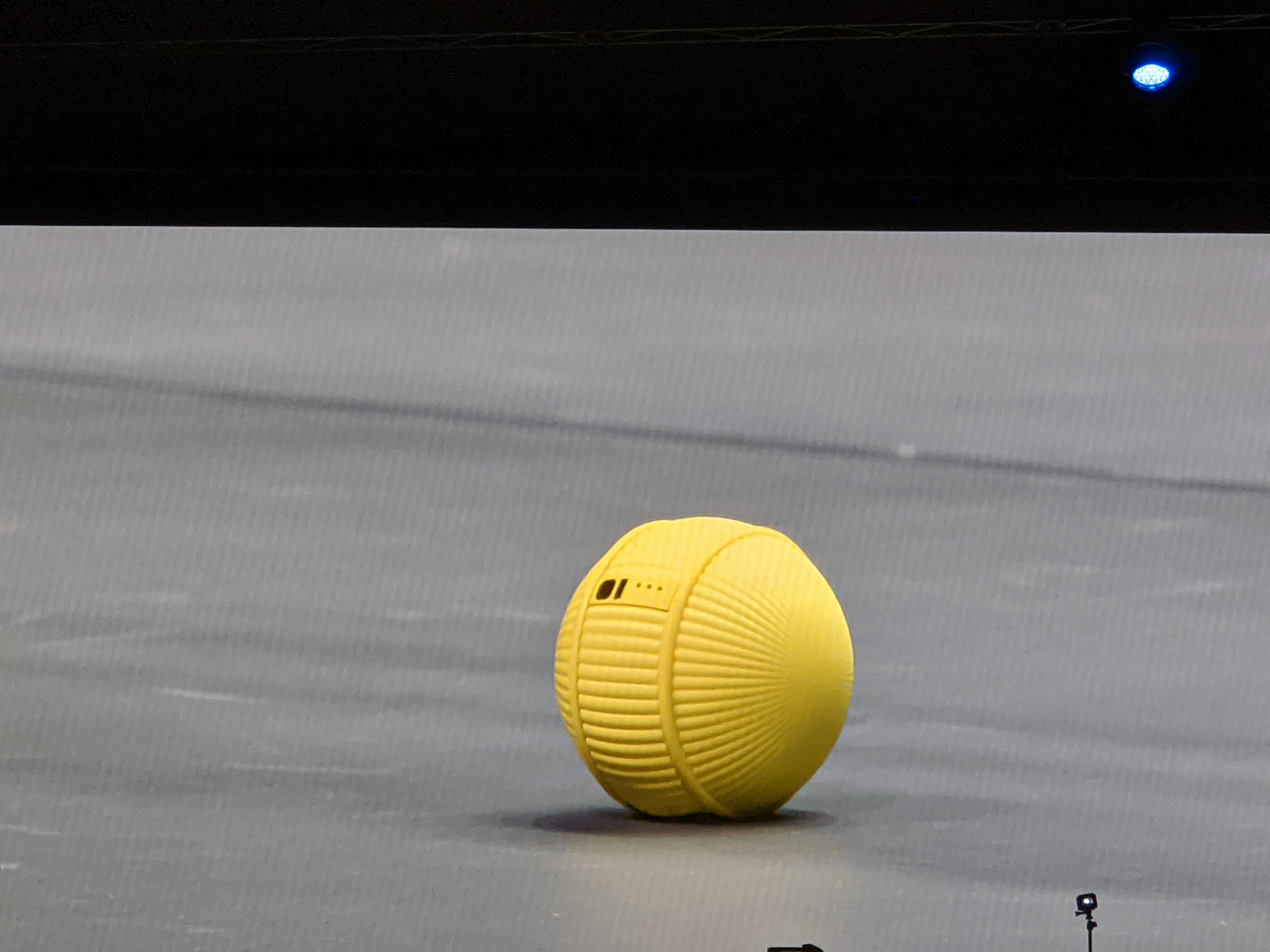 Above: Samsung’s Ballie can offer alerts for senior caregivers.

“We’re doing a lot of research to make something that’s approachable, not just to someone who’s very technical, but to my 70-year-old dad,” said Sadi. “We want the motion to be important. [Ballie is] connected to an individual … so that [allows] care scenarios.” He added that the technology is “proactive” in this context — “you don’t have to press a button.”

Sadi cautioned that despite what’s been shown publicly, Ballie is internally considered a concept rather than a product — at least for now. That said, he asserts it will be priced “affordably” if and when it ever comes to market, and that it’ll improve and grow over time through regular software updates. He also expects that many of Ballie’s systems will be exposed to hobbyists who might wish to tinker.

“Not hitting a good price point and, in addition, not hitting the right feature points where people get enough value from the device [is] not having a product-market fit,” said Sadi. “We have to answer the questions: How do we take all of robotics, which has been around for just over century, into account and bring it to the house? How do we introduce people to the idea of robots that track with you? How do we make those robots useful? How do we make it hospitable? How does the robot actually fit into your life?”