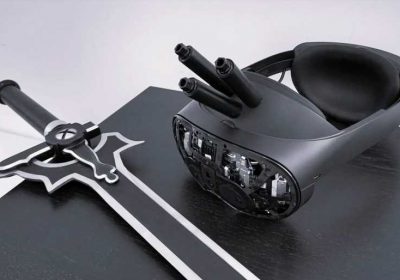 Palmer Luckey, the creator of the original Oculus Rift headset, says he’s modified a VR headset such that it can kill the user for real. The provocative art project is inspired by the anime Sword Art Online in which players who are trapped in VR die for real if they die in the virtual world.

In the anime Sword Art Online, November 6th, 2022 is the day in which the VRMMORPG goes public, and the same day that players learn the dire circumstances of their situation. As the story goes, unbeknownst to those who joined the game, the NerveGear VR headset they are wearing will kill them in real life if they die in the virtual world. They will also die if someone attempts to remove the headset from their real body.

Though there’s a long history of anime based on virtual reality, Sword Art Online rose to popularity right around the time the Oculus Rift was starting to gain traction through its record-breaking 2012 Kickstarter.

Luckey, the creator of the Oculus Rift, recounts the many people that asked him if he knew of the anime Sword Art Online at the time that he was getting the newly founded company, Oculus, off the ground. Not only did Luckey know of the series, he has become something of a mega-fan… the kind that would receive figurines of him and his wife dressed as the show’s main characters as a wedding gift.

Through Luckey’s unique experience as a VR pioneer, mega-fan of Sword Art Online, and later founding of a defense technology company, there could hardly be someone more apt to do what came next…

On November 6th, 2022—that significant date in Sword Art Online—Luckey claims he made a headset capable of killing its user via three explosive charges that could be triggered if the player dies in virtual reality. […] I used three of the explosive charge modules I usually use for a different project, tying them to a narrow-band photosensor that can detect when the screen flashes red at a specific frequency, making game-over integration on the part of the developer very easy.  When an appropriate game-over screen is displayed, the charges fire, instantly destroying the brain of the user.

Luckey believes the ultimate realism in VR can only come from having such extreme stakes.

The idea of tying your real life to your virtual avatar has always fascinated me—you instantly raise the stakes to the maximum level and force people to fundamentally rethink how they interact with the virtual world and the players inside it. Pumped up graphics might make a game look more real, but only the threat of serious consequences can make a game feel real to you and every other person in the game.

For now Luckey calls the project “a piece of office art,” but seems interested in pursuing the idea further still… even if he’s not ready to wear the thing himself.

This isn’t a perfect system, of course.  I have plans for an anti-tamper mechanism that, like the NerveGear, will make it impossible to remove or destroy the headset.  Even so, there are a huge variety of failures that could occur and kill the user at the wrong time.  This is why I have not worked up the balls to actually use it myself, and also why I am convinced that, like in SAO, the final triggering should really be tied to a high-intelligence agent that can readily determine if conditions for termination are actually correct.

A piece of “art,” indeed, though Luckey tells Road to VR that the explosives and trigger mechanism on the headset actually work, rather than being merely conceptual.

Though the idea seems rather morbid at face value, Luckey argues that it’s no different than the extreme consequences that underlie certain extreme sports. “This is an area of videogame mechanics that has never been explored, despite the long history of real-world sports revolving around similar stakes,” he writes.

Although this appears to be his first concrete step toward a headset that could kill the user, it isn’t the first time he’s dealt with the idea of a virtual reality game with real consequences to players.

Back in 2017 Luckey explained how he was drawn to the concept of tying one’s virtual mortality to their actual mortality, saying that he was interested in building a game that imposes “serious results” (short of death, but still meaningful) on the user to ratchet up the stakes of the game.

The setting of [Sword Art Online] was ‘If you die in-game you also die in the real world’. This setting became obvious right after the launch of SAO. This is a very extreme result. If a player makes the wrong decision he will have the result of his death. This is different to a normal game where you just shoot stuff, and it does not matter when you die because you can just respawn countless times.

There are some examples of hyper-niche games which do have relatively serious consequences, like Lose/Lose which not only deletes itself from your computer when you lose, but also deletes random files on your computer each time you kill an enemy. There’s also some hardcore ‘permadeath’ MMO players who are sworn to delete their characters if they die in the game, which could mean hundreds if not thousands of hours of their lives going to waste if they follow through with the promise.

Though Luckey was gifted a miniature of himself wearing the clothes of Kirito, the hero of Sword Art Online, one must wonder if Kayaba Akihiko, the villain of the story, might have been equally appropriate… Luckey even uses a picture of Akihiko as his Twitter avatar.