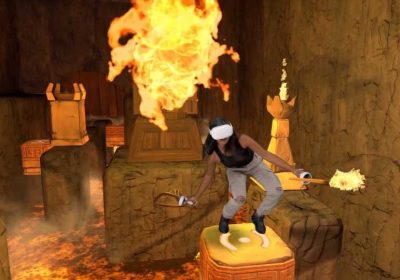 Eye of the Temple impressed us with its unique room-scale gameplay and inventive locomotion style back in its free demo last year. Now indie developer Rune Skovbo Johansen announced the full game is coming to PC VR headsets starting next month, and it’s bringing the bullwhip, hat, treasure, and plenty of ancient temples to explore.

Fans of the surprisingly full-featured demo on Steam will be happy to hear that Indiana Jones-style adventure Eye of the Temple will be releasing on SteamVR headsets on October 14th, 2021.

Eye of the Temple is a unique experience for sure. It requires a 2m × 2m area (6.5ft × 6.5ft) and asks the player to move through its massive room-sized puzzles by rolling atop virtual logs and riding on moving platforms. It sounds odd, but in our hands-on from last year we found the game’s various locomotion methods worked quite well as you walk, dodge, and duck your way through its vast temple complex. Another fun (and fundamental) bit of the action is the game’s physics-based bullwhip. You’ll use it to grab levers out of reach and to defend yourself against flying enemies. It took a little finessing in our initial hands-on, but it proved to be a handy little tool when you’re far away from puzzle pieces.

Eye of the Temple is launching on October 14th for Oculus Rift, HTC Vive, Valve Index and Windows VR headsets. Unfortunately Eye of the Temple is a PC VR-only title, however like a majority of SteamVR titles Oculus Quest users can play via Link or Air Link.

There’s no pricing info available yet, although if you’re looking for your own hands-on with Eye of the Temple before it launches, make sure to download the free demo here.