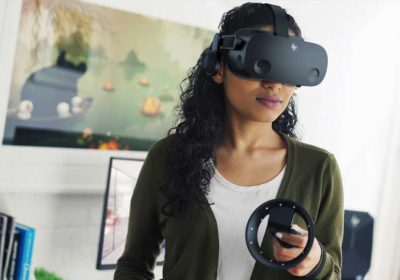 HP announced today that it’s launching an updated version of its Reverb G2 headset in the US that brings improvements to controller tracking, eye-relief, and AMD compatibility. Alongside the headset’s improvements, changes to the Mixed Reality Portal software in Windows 11 aim to streamline the experience for SteamVR users and improve performance.

When HP launched Reverb G2 late last year, it was a major upgrade to its predecessor. In our review we loved the headset’s improved image clarity, ergonomics, and audio, but weren’t so keen on the controller tracking coverage (which was improved but still not quite up to par), nor the lack of an eye-relief adjustment (which limited the headset’s field-of-view). Now HP says it has updated Reverb G2 to directly address those concerns; unfortunately the new version is only available in the US for the time being (we reached out to ask if there are plans to expand availability).

For controller tracking, the company says it has adjusted the Reverb G2’s cameras to improve vertical coverage by 30%, specifically “resolving blind spots above and below the waist.” We don’t have many details on exactly what changed with the cameras (angle, field-of-view, etc), though the company did confirm that it was a hardware change rather than merely software.

As for eye-relief, the updated Reverb G2 will include a new facepad with a removable spacer. With the spacer attached, the eye-relief is set to 15mm (same as the original Reverb G2), but when removed the eye-relief is reduced to 9mm, which will help more users achieve their maximum field-of-view.

The difference between the 15mm default eye-relief and the new 9mm setting won’t be as pronounced as the above test with no facepad at all, but it will surely help.

At launch original Reverb G2 had some spotty compatibility issues with AMD hardware. HP says the updated Reverb G2 includes a new cable for “increased compatibility with AMD systems, resolving connection issues.” There’s not a lot of detail at this time about exactly what has changed or which previously problematic AMD hardware has been addressed, but we’re in touch with HP with the hope of learning more.

The new cable will ship with the updated Reverb G2 and HP says it will also be available for purchase to be used with the original Reverb G2 for customers who had issues with AMD hardware (if you bought your G2 recently you might even be able to get one under warranty).

For users who are primarily using Reverb G2 (or other Windows VR headsets) as a SteamVR headset, the Mixed Reality Portal software can feel like a bulky burden standing between the headset and the SteamVR library.

Microsoft has shipped a range of improvements to Mixed Reality Portal with Windows 11 which aim to streamline the software, especially for SteamVR users.

For one, users can now essentially bypass the Mixed Reality Portal home environment and jump straight into Steam VR.

If you do want to use the Mixed Reality Portal home environment, there’s now a new space called Infinite Expanse which Microsoft says is designed to use less system resources in order to maximize performance when running other VR applications.

The updated Mixed Reality Portal software in Windows 11 also give users more control over when the software launches itself. Previously it liked to launch whenever the headset was connected or power-cycled. A new option allows you to change this behavior so that it only launches once the headset’s proximity sensor is triggered. HP says the new version of the headset will be sent out for any new purchases of the headset in the US, apparently starting today. The headset is conveniently discounted by $50 from the usual $600 MSRP. So far the company hasn’t said if it plans to sell the updated G2 outside of the US.

We’ve also reached out to HP to ask how users can tell the original G2 apart from the updated G2 so that they can be sure which version of the headset they’re getting. We’re awaiting more details on that front.