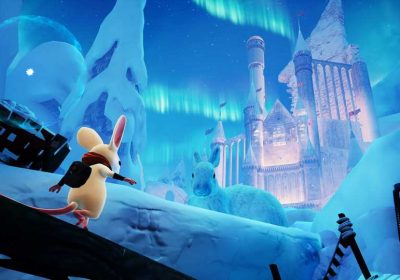 Moss: Book II, a direct sequel to the lauded original, was finally announced earlier this month. And it hopes to answer what was perhaps the original game’s biggest problem: it was too short! In an interview with the game’s Design Director, Josh Stiksma, we learned that, this time around, the second ‘book’ in the series is set to be thicker indeed.

Polyarc’s Josh Stiksma spoke recently to Road to VR about the anticipated Moss: Book II, which doesn’t have a confirmed release date but is due to launch first on PSVR (likely coming to other platforms in the future).

If it wasn’t clear already, Book II will pick up right where the original game left off. And just like the original—which had a giant snake as the primary antagonist—Book II will be centered around another animal foe, this time of the avian variety.

And while Stiksma says that the gameplay will be more of an evolution than a revolution, he confirmed that the game has been in development for two years already, and expects it will have a suitably larger scope than the original.

There’s a few reasons why: for one, the game has a larger dedicated team. The original game, Stiksma said, was developed when the studio was just 15 people total; a handful of them were only part-time on Moss, and some weren’t working directly on the game (like HR, finance, and marketing). Polyarc has since grown to 32 people, and this time around there’s 15 people working full-time directly on Moss: Book II, he said.

Beyond having more hands on deck, Stiksma also explained that there’s significant gains in efficiency when working on a sequel compared to a brand new game. Much of the creative overhead—like art direction, level design, character design, tooling and much more—has already been ‘figured out’, which makes it quicker to build on top of that work compared to creating an entirely new world, characters, and gameplay. But Moss: Book II won’t just be more of the same, Stiksma said. While the core gameplay remains in tact, the game will add some new interactions and a sort of progression that will deepen the game’s mechanics.

Players familiar with the original game will recall that while they control the main character, Quill, from a third-person view, they themselves are present in the world as well. The game requires that players actually reach out and interact with certain parts of the world to open new pathways and help Quill in other ways.

Stiksma gave an example of one new interactions in Book II, in which players will connect magical vine bridges from point to point to help Quill navigate the environment. And then there’s what Stiksma called “progression,” which takes the form of new weapons that Quill will find throughout her journey, opening the door to new attacks and abilities.

In the Moss: Book II trailer we can see Quill discover a large hammer, and see the player touch her sword to power it up for a dash attack that crosses platforms. It isn’t clear yet if the player will get to swap weapons freely or if each section of the game will be built around one specific weapon. Stiksma wouldn’t go as far as saying whether Moss: Book II will launch in 2021—though the announce timing seems about right for a holiday release—but he did confirm that it will launch first on PSVR. The studio could try to time the game’s release date with the launch of PSVR 2, though it also doesn’t have a specific release date (but is expected in 2022).

Like the original Moss, it’s unlikely that the sequel will stay exclusive to PSVR indefinitely. Stiksma stressed how important porting the game to other VR platforms has been to Moss reaching the platinum sales milestone, and we expect the studio will want to follow a similar timed-exclusive path for Book II.