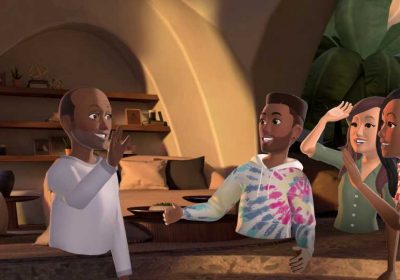 Last year Meta announced that it would finally be bring social features to the Quest home environments, allowing users to easily get together in the same virtual space. We aren’t there yet, but the company has taken a first step in that direction by adding node-based locomotion to all of Quest’s home spaces.

Back in October Meta announced that it “soon” planned to upgrade Quest’s home space into a social area where users can congregate together (without a third-party app) and do basic activities like watch videos and launch into other VR apps together. The company calls it ‘Horizon Home’.

Well, the actual social part of Horizon Home isn’t here yet, but the company has taken a first step toward it.

At launch, all Quest home spaces placed the user in one specific spot from which they couldn’t move.

Now, as of at least Quest v38, all home spaces have an array of nodes which users can move between by pointing their controller and using the thumbstick. Moving between nodes with controllerless hand-tracking alone doesn’t seem to work yet.

Ostensibly this will allow multiple users to navigate the same spaces. It isn’t clear how many users will be supported in a single Quest home space (though voice parties currently support up to 8 people).

Quest’s home environments appear to be using typical real-time rendering, so it isn’t clear why Meta has decided to limit users to moving between specific nodes rather than letting them move anywhere within a pre-determined safe area. Especially odd because users can navigate away from any individual node by physically moving within their playspace. Furthermore, the distance between nodes is decidedly ‘impersonal’, and further away than friends hanging out in the same area would likely want to stand.

So while movement within the Quest home spaces is a first step toward social features, it will hopefully see some refinement by the time users are actually able to join each other in the same space.