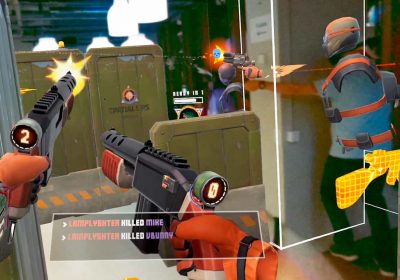 Spatial Ops is a competitive FPS designed for mixed reality passthrough on Quest 2 and Quest Pro, available now in open beta on SideQuest. We recently tried it out and there’s a lot to be excited about.

The last year or so has seen a big increase in “mixed reality” experiences available on the Quest platform, particularly with the improved passthrough available on Quest Pro. There’s been some interesting concepts to play with, but Resolution Games’ latest project, Spatial Ops, feels like a rare peek forward into the true future of mixed reality.

With support for 1-8 players, Spatial Ops takes place in a mixed reality battleground that uses Quest 2 and Quest Pro passthrough to create a head-to-head, laser-tag like experience. Spatial Ops centers around playing together in the same real world space and creating your own custom map, leveraging Quest’s bourgeoning mixed reality capabilities to create an experience like nothing else on the platform. It’s the best of both worlds – the unique, immersive advantages of VR, with the thrill of competing with others in a real, physical space.

After going hands-on with Spatial Ops for a few hours at Resolution’s offices in Sweden, I came away very impressed. I played on both Quest 2 and Quest Pro, in a full round-robin tournament with four teams of three players across three game modes. You can check out some gameplay from the tournament embedded above, featuring a full round of 3v3 Team Deathmatch captured on Quest Pro.

Team Deathmatch is just one of several game modes available, including Capture the Flag, Free-For-All and Domination. There’s a comprehensive map editor, which allows you to design a battleground on top of your real world environment. Not only can you mark out your walls and furniture, but you can also place in-game geometry and elements such as tactical barriers, weapon drops and spawn points.

Spatial Ops an absolute blast to play, but it’s also quite a remarkable technical achievement. The games I played weren’t without hiccups, but for the most part, Resolution absolutely delivers on the core promise of a compelling multiplayer shooter that embraces mixed reality on a larger scale than we’ve ever seen before.

The best way to play is obviously on Quest Pro, which takes advantage of the headset’s improved passthrough image – full color makes a big difference, especially here. However, Spatial Ops is also surprisingly enjoyable on Quest 2. Yes, you’ll be using the headset’s grainier passthrough cameras, but Resolution also allows you to switch between a lighter and dark greyscale, alongside color tint overlay options, such as red and blue. I played the majority of my Spatial Ops matches on Quest 2 and still had an absolutely amazing time.

The weapons you’ll use include pistols, shotguns, miniguns, sniper rifles, riot shields and grenades. The models for each look stunning, blending well with the real world, and the smooth animations give each weapon a tactical feel. Most weapons have limited ammo and while some can be reloaded, it’s often easier to move onto a new one by running to another weapon spawn point.

What’s most surprising is how mixed reality elevates a fairly basic multiplayer shooter into something way more engaging and surprisingly strategic. You’ll be able to naturally communicate with both your own team and the enemy, and you’ll likely get much more physical than you would in any other VR experience. During our sessions, players were diving behind cover, lobbing grenades backwards over shoulders and using the real world’s physical cover whenever possible – it just feels natural. There was one point where I realized that I could physically block another player’s path to the objective by standing in their way, or even pushing them away. It’s more visceral and present than even some of the most immersive VR games.

All that said, there are some major caveats and growing pains that come with Spatial Ops, all of which are understandable but worth considering nonetheless. Firstly, Spatial Ops works best with a fairly large space (especially with higher number of players) and supports up to 20x20m, which is larger than the maximum size of the Quest guardian system. To play in an area that big, you’ll need to use a Developer Mode setting to turn the guardian off.

Likewise, not only will you need two (and up to eight) other players with a Quest 2 or Quest Pro headset, but they’ll also all need to be in the same physical space. Even with VR becoming more popular than ever, that’s a tall ask for a lot of people.

There’s also the technical backend and setup process of Spatial Ops, which is a curious situation to examine. The Quest platform still doesn’t have support for shared space colocation, which allows multiple headset to occupy the same physical space with an understanding of where each headset is positioned relative to one another. Meta previously indicated that the feature is on the way, but it’s still not available.

For a game like Spatial Ops, which can feature eight headsets all playing in the same shared space, this becomes quite a conundrum. Resolution has essentially created some in-house workarounds that work adequately, but make things a little complicated.

Before starting a Spatial Ops game, one user will mark out the physical space (including walls, furniture and more) in-game and design a map for the space. Each subsequent player will then download the map and follow an in-game tutorial that gets them to to align the map perfectly to the same physical space. This involves setting a controller against an agreed-upon corner of the physical space, which is set and communicated by the map designer. This will then align the map perfectly for each headsets.

This solution isn’t true colocation, as the headsets aren’t using shared location data to update where they are in relation to one another – the in-game avatars simply move across a map that is perfectly aligned to the same physical space across each headset. This also means that Spatial Ops isn’t a local network experience yet – everything is still running through online servers and subject to interruptions and lag.

To Resolution’s credit though, it works remarkably well and is all fairly accurate and seamless when done right. There’s no denying the map and room setup process is a hassle with the current solution, but it will no doubt be significantly improved when Meta finally launches colocation support for Quest and refines its experimental room setup features.  For now though, Resolution’s solution is a smart workaround that’s as smooth as possible, given the circumstances.

I also suspect that Resolution is playing the long game with Spatial Ops. There’s a reason that today’s launch is only an open beta available on SideQuest – as the technology improves, Spatial Ops will adapt with it. The game’s core concept and foundations are solid, and that’s what’s important.

So while it might be hard to find eight friends with Quest headsets, gather them together at a huge indoor play space and setup a game, that shouldn’t take away from the achievement and thrill of Spatial Ops. If you can, I highly recommend giving the game a try – it’s a magical peek at the future of mixed reality gaming and unlike anything else available at a consumer level.

The Spatial Ops open beta is available now for Quest 2 and Quest Pro via SideQuest. You can find our guide on how to sideload games with SideQuest here.