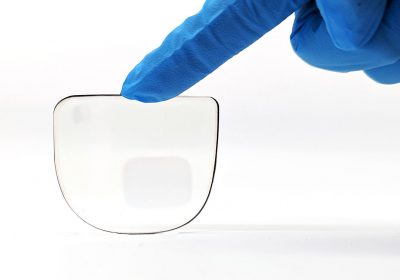 DigiLens, a maker of waveguide optics for AR glasses, today announced a second close of its Series D funding round, claiming a $530 million valuation.

DigiLens is one of several companies building waveguide optics and positioning them for use in XR. Waveguides allow for extremely compact near-eye optics which are no thicker than the lenses on a pair of glasses.

Today the company announced a second close of its Series D investment round which brings participation from Corning, a major materials company known for its Gorilla Glass product that’s used widely in the smartphone space, and Optimas Capital Management, the strategic investment arm of Goertek which is a major manufacturer of XR devices.

The Series D investment raised “more than $50 million”; the first close of the round was originally announced back in November 2021 and valued the company at $500 million, according to DigiLens.

With additional investment from Corning and Optimas Capital Management in the second close of the round, the company says it has been valued at $530 million. The full round includes a number of strategic investors including Samsung Electronics, Diamond Edge Ventures (the strategic investment arm of Mitsubishi Chemical), and others.

In an investment round, a startup’s valuation is determined by the price of each share multiplied by the total number of shares in the company. It’s fairly rare for a company to state their valuation outright, except in cases where they believe the valuation shows the company in a position of strength and momentum.

That’s clearly the case here; with waveguides expected to be a critical component in AR headsets and glasses targeting mainstream adoption, DigiLens is vying to be the leading supplier of the technology. The goal of publicly announcing a large valuation is likely to throw off competitors by making potential investors think twice about who is leading the race toward an AR glasses market that many believe is poised to explode.

The company claims its particular approach to waveguides—diffractive gratings manufactured with an optical copy process—are the most cost effective and scalable option among available waveguide technologies. DigiLens also says its specific manufacturing process allows for more flexible optical designs that give its optics advantages over other waveguides.

Of course, every waveguide company makes similar claims about manufacturability and scalability; it won’t be clear who is actually right until we start to see mass-produced devices coming to market.

To that end, the company claims the first products based on its waveguide technology will hit the market within the next year.

“We’re working on projects today that use our industry leading volume Bragg grating technology that over the next year will be in the market in a material way. These advances will showcase that we’re the only solution that is going to work when efficiency, uniformity and cost are considered,” says DigiLens CEO Chris Pickett. “Then, with our next generation technology, we’ll have a step function in performance that will extend our lead even more.”

And we’ve got a good clue about what the first such devices could look like. Last year DigiLens revealed the Design v1, a modular reference headset which the company hopes will accelerate the development and consumerization of AR glasses. The device is based on Snapdragon XR2 with a claimed 50° diagonal field-of-view from the company’s optics. Road to VR got an exclusive hands-on with the headset.

It seems likely that companies working with DigiLens will have received a sample of the Design v1, and some may even be using it as the basis for their own design.

And while AR glasses are where the industry ultimately wants to reach with this technology, it’s likely that we’ll see non-immersive smartglasses as the first entrants into the all-day wearable glasses space, eventually giving way to similar but more advanced devices with full AR capabilities.