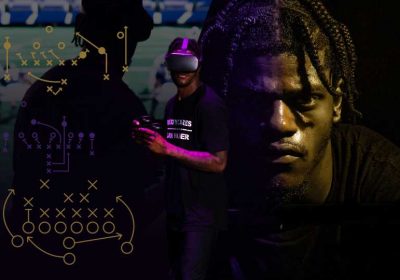 XR startup StatusPRO has announced it has raised a $5.2 million seed investment. While the company hasn’t fully revealed its product, it says it’s using AR and VR to create immersive sports training and gaming experiences. Teasing a partnership with NFL quarterback Lamar Jackson, the company claims its tech will usher in “a new era of football.”

Earlier this month StatusPro announced a seed investment of $5.2 million, building on a partnership with NFL quarterback Lamar Jackson to create the Lamar Jackson Experience, which the company describes as “a suite of first-person virtual reality products that include an at-home virtual reality game, arcade games, and live activation.”

The minority-owned StatusPro says the capital will “accelerate the expansion of products aimed at reshaping how players and coaches prepare for games, while defining a new form of engagement between athletes and fans.”

The company is focused on both XR sports training and gaming. On the sports training side, the company hasn’t publicly detailed its platform, but claims it “uses real-time player data to power holographic experiences that give players the ability to simulate any practice or game scenario without the physical impact that comes with playing the game.” StatusPro claims its tech is being employed by “several” NFL teams, including Lamar Jackson’s Baltimore Ravens.

These XR training experiences also form the basis for fan-focused gaming experiences. That seems to be the idea behind the Lamar Jackson Experience, which the company has teased but not fully revealed. According to the company’s website, the experience is “coming soon on Oculus” (and probably Quest specifically, seeing as that’s the headset shown in the teaser).

“Like most people from my generation I am a huge gamer, and the first time I demoed the StatusPro experience I was blown away by how realistic and fun it was,” Lamar Jackson said in his StatusPro partnership announcement last year. “Ever since I was a kid, I always wanted to play in the NFL and now that I do, I am excited about sharing my experience with fans and especially kids through this VR gaming platform.”

StatusPro claims that “Lamar Jackson has been an integral part of the development, strategic planning and promotion of these experiences, and a true partner in all aspects.”